We can supply the following information for teachers planning a visit to the Museum and the village:

We also have information that will be of use to people who are studying the Plague and its effect on the village:

Many years of research by John and Francine Clifford have revealed that the population of Eyam was considerably more than the 350 estimated by William Wood in his "History of Eyam" in the early 19th Century. William Wood took William Mompesson's statement that "76 households were touched by the plague" to describe the entire population, but in fact many households escaped infection. 700 individuals can be identified as living in Eyam when the plague arrived, and there may have been more because doubtful entries have been discounted.

The principal sources were the Hearth Tax assessments and the Eyam Bishop's Transcripts and many other documents in the Staffordshire Public Records Office and National Archive at Kew.   Permission to access the information is gratefully acknowledged. 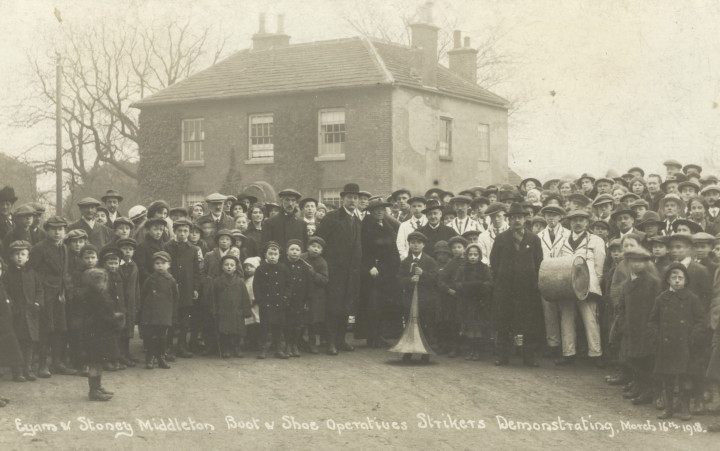 A number of long term Eyam residents were interviewed by George May in the 1990s about life in Eyam from the early 20th century onwards. Click on their names and press the "play" arrow in the top left hand corner of the screen to hear their fascinating stories.

Alan and Barbara Ashton recorded in 1997. Barbara talks about growing up in the village in the 1930s, and they both remember war time in Eyam. They remember there being over 40 shops in the village.

Madelaine Olga Cocker recorded in 1997. Madelaine remembers her Eyam school days and working in one of the shoe factories in the village from the age of 14.

Nick and Ruth Cook recorded in 2015. Nick was a chef in London and moved to Eyam to take over the Miners Arms in the early 1990s. AT that time there were still 4 pubs in the village. They also talk about the origins of the Eyam Half Marathon.

Cecilia Daniel recorded 1997. Cecilia moved to Eyam in 1938 when she married Clarry Daniel  whose personal collection formed the foundation of what is now Eyam Museum.

Dorothy Fox recorded 2015. Dorothy moved to the village as a young girl and grew up living at Ladywash Farm where her father managed the sheep. She went to Eyam School after which she worked in one of the Shoe Factorys before marrying and bringing up her family in the village. She details all the different shops which were in the village at the time and what they sold.

Lynn Jackson recorded in 2015. Lynn moved to the village in 1979 when she married the village doctor. She talks about the early days of the Mechanics Institute, the luncheon club and the foundation of Eyam and Bakewell Community Transport. She feels that the re-telling of the Plague Story has helped the sense of community in the village.

Derek Knowles recorded in 1997. Derek remembers working on a farm before mechanisation in the 1940s. After the war he and his father were involved in the recovery of flourspar from the waste at the old Lead Mines. He was also very knowledgable about the shoe factories in Eyam as well as other local industries. A key date in the 1960's was the coming of mains sewerage in 1963.

David Lewis recorded in 2015. David and his wife moved their family and his architectural practice to Eyam in 1982. He founded the village society and  then went on to be one of the founding members of Eyam Museum with Geoff Ward, Charles Maltby and John Clifford. The museum was based on the personal collection of Clarence Daniel. He also put on major jazz concerts in the village featuring internationally renowned artists.

Barry and Margaret Lomas recorded in 2015. Includes a description of Water Lane and its residents from the 1950's. Both businesses and private residents including farmers, cobblers, a doctor, the fire then the ambulance station and the great excitement caused by one family who emigrated to Australia

Marie Lowe recorded in 1997. Mary moved to Eyam in 1945 from Grindlow and lived on New Road. She was a member of the Wesleyan Reform Chapel which was known as the "bottom chapel". She reminisces about outings, events and the Womens Auxiliary Wesleyian Society.

Charles Maltby recorded in 1997. Charles grew up on a farm in Eyam and went to Lady Manners School in Bakewell. He worked for the Sheffield Steel Company Edgar Allen who moved their offices to Eyam during WWII. He remembers war time farming and the bombs which fell nearby.

Betty Marples recorded in 1997. Betty was born at the Miners Arms where her father was the Landlord, in 1907.

Doug Nash recorded in 1997. Doug talks about the local Lead Mining industry which was a life long interest of his.

Lily Nettleship recorded in 1997. Born in the village in 1919, Lily remembers growing up at a time before running water and mains sewerage came to the village. She originally worked in one of the shoe factories and then as a housemaid in Tideswell

Mary O'Connell recorded in 1997. Mary was born in the village in 1913 and went to school here before starting work at the shoe factory at the age of 14.

Tony and Mary Oddy recorded in 2015. They talk about managing the Youth Hostel from the 1980s onwards. In a normal year, they provided 23,000 meals to visitors. They had first visited the area as volunteer Youth Hostel managers in the 1960s and remembered the Plague Tercentenary in 1965.

John and Joan Plant recorded in 2015. Joan has lived inthe village all her life and still lives in the house she moved into when she was 12. John moved from Grindleford when they got married. They talk about the different pattern of life in the 40s and 50s when most people in the village worked locally or commuted to Sheffield and Manchester via the 3 morning and afternoon busses which connected with the trains at Grindleford.

Eugenia Ridgeway recorded in 1997. Eugenia was born in the village and having moved away, return when she married Peter in 1950. Peter ran one of the shoe factories in the village.

Roger Ridgeway recorded in 1997. Roger talks about the history of Lead Mining, and the extraction of fluorspar and barytes.

Clarice White recorded in 1997. Clarice was the 12th of 13 children living in a little cottage at Townhead. Her father worked in Eyam Quarry

Robert and Nicola Wright recorded in 2015. Robert and Nicola talk about inheriting Eyam Hall in 1990 and moving in with their young family. They set on an extensive process of renovation and opened their home to the public in 1992.