Our collection contains many documents, photographs and postcards. It also includes many excellent local minerals and fossils, archaeological material including flints and pottery, many mining artifacts, and much more.

Clarence Daniel's collection was examined and catalogued by a team of volunteers. It was carefully packed and stored with the Derbyshire Museums Service, on the demise of which it was moved to an office in Matlock. When it was retrieved three boxes, including figured flints, were missing. Ros Westwood, of Buxton Museum and Art Gallery, recognised our code number on items she found in a basement at the Record Office and they were returned to us, demonstrating the value of the system of coding all museum artifacts.

The collection now includes much material on Bubonic Plague, not only relating to its effect on Eyam, but the epidemiology and spread of plague and other diseases world-wide. The library also includes much on local history. We have a large number of local photographs and postcards, some dating back into the 1800s.

Clarence Daniel collected fossils and minerals locally for many years. Working for the local mining company, he was able to acquire some superb specimens from the local mines. He discovered some unique fossil localities in the hills and fields around the village. A number of fine specimens have been donated subsequently to Eyam Museum.

A great variety of stone artifacts has been found in the locality. They range from prehistoric hand axes to gravestones of the plague period, querns, flint tools and flint flakes.

This category includes both recent and prehistoric pottery, from many fragments of iron age and Roman pottery to recent earthenware and mediaeval items found in local archaeological digs.

Modern fluorspar mining often intersects old lead workings, and when the ore is processed metal objects are separated from the ore. Many turn out to be interesting tools and other artifacts from the early lead mining days. Clarence Daniel was an avid collector of such items.

Many tobacco pipes are found in the old lead mines, on field surfaces, and in old tips. Usually they are broken, but occasionally one comes to light that was left on a ledge by a lead miner and forgotten, sometimes hundreds of years ago. The collection includes many pipes, and their history is one of the current displays.

The silk and shoe industries were locally important for many years, and a number of tools and other items have been donated to the museum.

This category includes a number of paintings by local artists, and local sketches by Clarence Daniel.

There is always a miscellaneous category! Ours includes samplers from the early days of Eyam School, the tea urn and other items from the Wesleyan Chapel, an early drinking flask, a petrified birds nest, snuff mills, indeterminate tools and many other items. 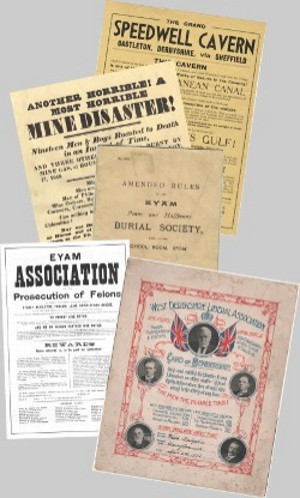