Eyam Museum has been created by people from the village, and is run by people who live in Eyam and the surrounding villages. It is typical of Eyam which has a history of community action - villagers coming together to improve life in the village.

Our Museum has charity status and rely entirely on a team of volunteers to keep the museum open.

The majority of our stewards live in the village or have a family connection with Eyam. They have grown up with the plague story and share our view that the example it sets of self sacrifice for the benefit of others is one which deserves to be told to visitors to the village. Keeping the story alive by retelling it, honours the sacrifice of those villagers of 350 years ago.

The foundation of Eyam Museum was inspired by Clarence Daniel, a lifelong resident of Eyam who collected local fossils, minerals, archaeological material, plus documents and papers related to the village and its history. He ran a small private museum in his house, but was always thwarted in attempts to set up a public museum. His collection was passed to the Village Society on his death in 1987, and it was decided that this should form the basis of a museum.

A small group of enthusiasts formed Eyam Museum Limited and a larger group of volunteers catalogued the collection over a period of months. The hunt for a suitable location led eventually to the Methodist Chapel on Hawkhill Road. After a period of frantic activity Eyam Museum opened on 23rd April 1994 as a small museum. It has subsequently developed and prospered thanks to the extraordinary efforts of all those volunteers who have been involved over the years.

Please note, we only allow assistance dogs into the museum.

We use the space to explain the Eyam Plague story fully, and also to look at plague more widely throughout history. We look at when and where it happened, where it came from, how it spread, and how many people were killed.

The story is then brought up to date by explaining what we understand now about the plague, where it still happens and how it can be controlled. We show, by applying today’s understanding to what happened 350 years ago, why some villagers are thought to have survived; and most surprisingly what we can learn from their descendants in the village today about modern day disease.

The story begins with a pictorial description of events in London in 1665. It goes on to describe the nature of the bubonic plague (black rats bearing fleas, which in turn carry the deadly bacilli) and its spread and effect upon human populations from biblical times(eg. Ancient Egypt) to the Middle Ages (The Black Death), and on to the mid-17th century. The story of the Eyam outbreak itself begins with facsimiles from the Parish Register, wills, and other documents of the time. Also illustrated are some of the supposed remedies for the Plague.

The story of the plague continues with the description of the arrangements made by Mompesson and Stanley, the Rector of Eyam at that time, who had persuaded the villagers to voluntarilly quarantine themselves to prevent the infection spreading to the surrounding towns and villages. A chart shows the households known to have suffered plague deaths, and their relationship to each other through kinship.

The exhibition shows the growth and decline of local industries. How the village recovered after the plague. The geology of the area is particularly interesting, and is briefly described, including a dramatic model of an old lead mine.

Also, on the ground floor is a display on 17th century medicine, and an array of early medical instruments. It also includes a digital presentation, 'Eyam then and now' showing how the village has changed over the past 100 years. 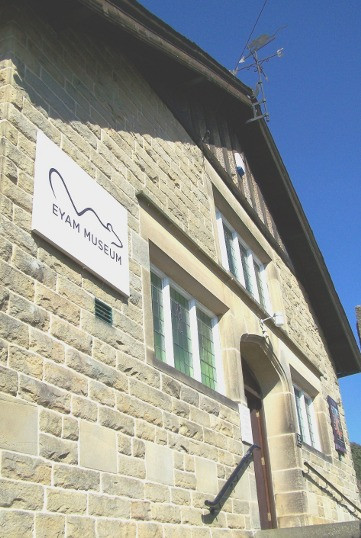